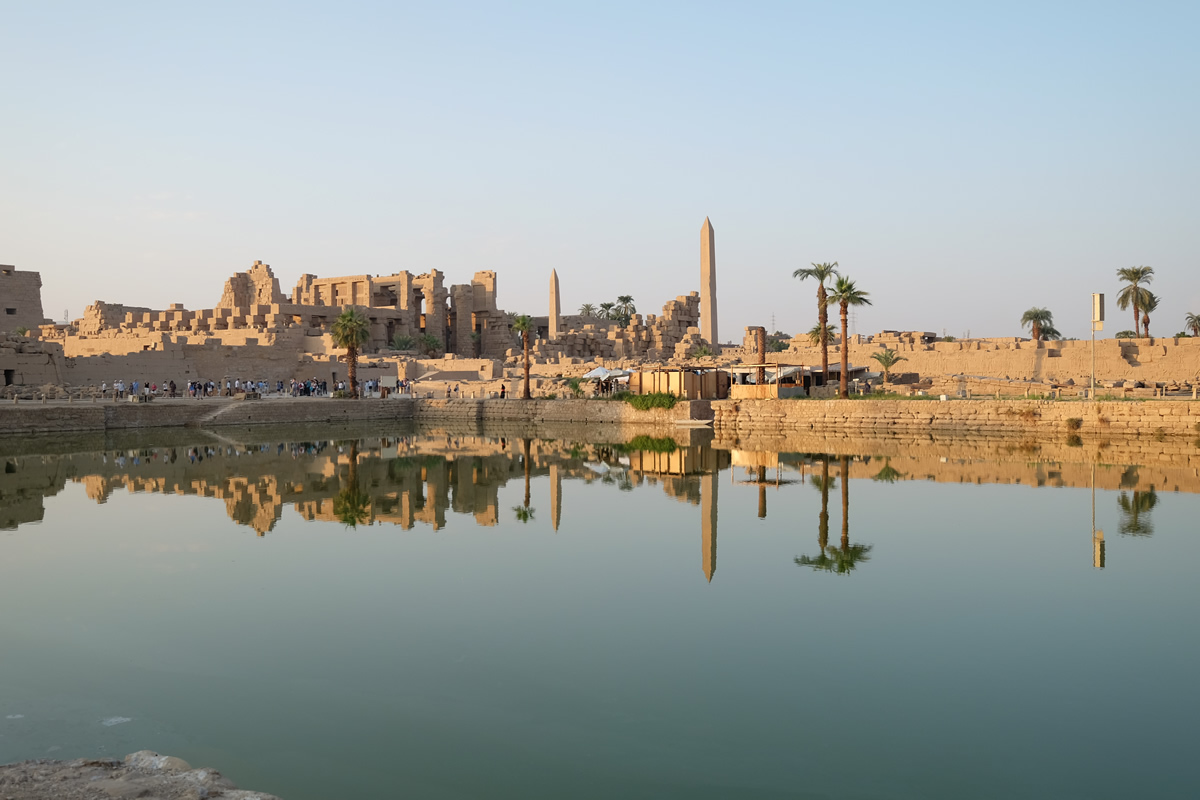 We agreed that we wanted to explore Egypt without having to fight through crowds of tourists or endure the tourist-targeted folklore offered on the big Nile cruise ships. Given this, it was easy to pick the method of travel that most appealed to us. We chose a dahabeya, the traditional sailing ship, and dreamed of travelling the Nile in the style of the early explorers and adventures over a century before us. Leaving the hustle and bustle behind, we would journey in comfort on the dahabiya Abundance (Wadi el Kheir) to Middle Egypt – home of the most fascinating sites from the Pharaonic era and from Coptic and Islamic times. And all without the crush of tourist traffic.

Our first night on the dahabeya Abundance was spent in Luxor, where we had explored the magnificent Tombs of the Nobles.

As dawn broke the next day, our adventure began to unfold. As we enjoyed our breakfast on deck, the Nile Valley glided past in all its fascinating colour, slowly coming to life in the morning sun.

We spent the next few hours on deck drinking in the passing scenery before reaching Qena, where we disembarked to visit the Temple of Dendera. The enormous size of this temple, dedicated to the goddess Hathor, was stunning enough, but its richly colourful ornamentation took our breath away. The unique reliefs on the ceiling depict astronomical subjects – the zodiacal constellations, the decans, the lunar phases and the hours of day and night hours. We could also descend into the mysterious temple crypts…

Our heads spinning with everything we had seen, we returned to the dahabeya where the chef greeted us with a truly magnificent meal. Exploration is a hungry business! While we were feasting on all the delicious dishes the dahabeya cast off again, this time with Nag‘ Hammadi as our destination. We moored here for the night and enjoyed the evening hours on the deck of the Abundance before the sun finally slipped below the horizon.

The next day began with a visit to the Palace of Prince Yussuf Kamal in Nag‘ Hammadi, built in the first half of the twentieth century. We were enchanted by its gorgeous, opulent interiors took our breath away.

Back on board the Abundance, we were soon to experience a further highlight. The pivot bridge at Nag‘ Hammadi had to be opened to allow us to pass through. The spectacle attracted an audience of old and young, local Egyptians and fascinated travellers alike.

After passing the bridge we continued our journey and headed for our next destination, the harbour of El Balyana. On the way we passed Gebel el-Tarif, where the famous Nag‘ Hammadi library is said to have been found. Rock-cut tombs from the Pharaonic era, which served as refuges for the early Coptic Christians, can still be seen in the cliffs today

We started the next day with a lavish and leisurely breakfast on the deck of the dahabeya and then set off for the most famous cult site in Pharaonic Egypt – Abydos.

There we visited the stunning Temple of Seti I and adjacent Osireion temple, poring over the richly detailed portrayals of battles on the exterior walls of the Temple of Ramses II. After exploring the temples at Abydos we continued our journey down the Nile.

Our next port of call would be Sohag, capital of Sohag Governorate and home to the famous Coptic monasteries. These were one of the supreme highlights of our journey to Central Egypt.

The glorious decorations in the Red Monastery, beautifully restored after centuries of concealment under dust and dirt, left us utterly speechless with wonder. This early Christian place of worship is often compared to Hagia Sophia and San Vitale – and with every justification!

After making such an impressive acquaintance with Egypt’s Christian heritage, we brought the day to a close with a visit to the largest surviving Ancient Egyptian depiction of a woman, the Statue of Meritamen, and to the recently opened Archaeological Museum.

Next day’s schedule took us to our next harbour, Asyut.This was our base for visits to the rock-cut tombs at Meir and their uniquely detailed paintings of daily life, and the famous monastery of Deir el-Muharraq – an annual pilgrimage destination for many thousands of Christians.

Still dazed from these captivating experiences sights, we left Asyut and headed for Mallawi. Along this part of the route, the course of the Nile winds closer to the mountains, pitted with numerous rock-cut tombs and quarries; we only needed our cameras to continue our “explorations” without leaving the comfortable deck.

The next mooring place of our dahabeya Abundance was a very special location – Tell el-Amarna, the short-lived city of heretical King Akhenaten, who tried to establish worship of the sun god Aten as the only true god and triggered a religious revolution.

But before we went exploring there, our agenda held further fascinating sights. We visited the ancient city of Hermopolis (today: El-Ashmunein), rich in impressive traces from every era of Egypt’s history.

Our next stop was Tuna el-Gebel, the necropolis of Hermopolis. Here, subterranean catacombs many kilometres long contain millions of animal mummies, most of them ibis and baboons sacred to the god Thoth, who was worshipped here.

But animals were not the only beings to find their last resting-place here. The necropolis also contains human tombs; the most fascinating are the tomb of Petosiris, ornamented in a unique blend of Greek and Egyptian styles, and the tomb and chapel of Isadora, who drowned in the Nile at a young age.

After fortifying ourselves with a delicious meal on board the dahabeya, we continued to Tell el-Amarna – or Akhetaten, as it was known to the Ancient Egyptians. The site is home to numerous rock-cut tombs containing lavishly detailed depictions of the ancient city, which vividly bring it to life in the imagination.

The last stage of our river journey began the next morning as we headed to El Minya, capital of the Minya Governorate. After arriving, our first action was to take an evening stroll through the city, exploring the streets and revelling in the bustling, lively atmosphere along the crowded Corniche.

The next day began with one of the greatest highlights of our whole trip: the necropolis of Beni Hasan. The gigantic scale of these rock-cut Middle Kingdom tombs left us awestruck. We marvelled at the famous wrestling scenes and depictions of Asian caravans and were delighted to discover the only depiction of flying foxes in Pharaonic Egypt as well as hosts of mythical creatures. This is the only location in all of Egypt where artworks of this kind have survived.

We left the necropolis of Beni Hasan enthralled at the wonders we had seen. But a highlight of quite a different kind was next on the agenda: a visit to Zawyet el-Maiyitin, a village famous for its cemetery of domed tombs, and home to the museum of the famous Egyptian artist Hassan el-Shark. The artist himself welcomed us into the display of his stunning artworks.

After snapping up a new centrepiece for our living-room, we returned to the ship for our last evening on the dahabiya Abundance. The chef served up a delicious turkey feast in an attempt to console us, but only made it all the harder for us to say goodbye next morning to the dahabeya, Captain Mohammed and his wonderful crew.

But these goodbyes were definitely au revoir and not adieu! We’ll certainly be back, and look forward to embarking on new adventures and exploring little-known regions again soon!

If you have any questions, please do not hesitate to contact us!

Would you like to discover Egypt while cruising the Nile on a dahabiya or a felucca? Are you interested in our offers or do you have any questions? Please feel free to send us a message.

If you do not receive an answer from us today or tomorrow, please check your spam folder.