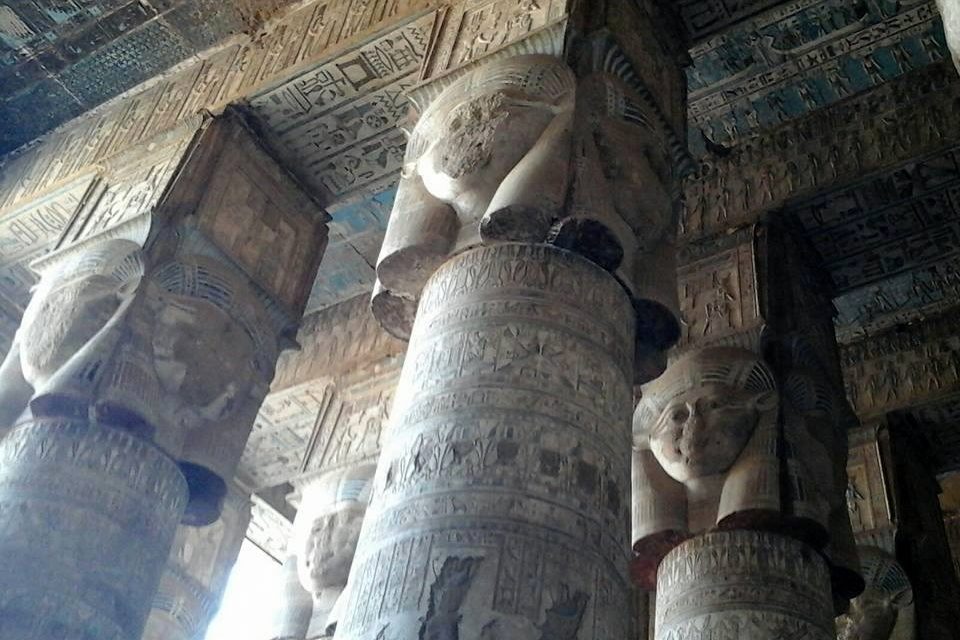 After we have descended the stairs from the roof again, now following the depictions of the priests on the other side of the stairs who are doing the same, we cannot help but take another look around that magnificent first hall with the amazing colors, and take a breather on one of the column bases, staring up and up…

But then, it is time to go and explore outside. As we walk around the temple’s exterior walls with the sacred lake full of palm trees on our right, we are heading towards one of the most famous depictions at Dendera: a truly giant depiction of the famous Cleopatra (who was actually number VII of that name) and her son Caesarion, offspring of Julius Caesar and Cleopatra, offering incense. It is enormous and clearly a statement of power – Cleopatra wanted Caesarion to succeed her as pharaoh of Egypt, and jumped the gun here by already portraying him as a fully crowned pharaoh, with his names in cartouches, too. Unfortunately, she became the last of her line to hold the Egyptian throne – Egypt became a Roman colony after her clever power games with influential Romans ended in a sound defeat at the Battle of Actium in 31 BCE.

When you turn your back on Cleopatra and her dreams, you see a small temple in front of you. This is called the Iseum and is connected with the goddess Isis, the mother of Hathor’s husband Horus. But interestingly enough, as we enter the chapel, it’s not a depiction of Isis in the middle of the back wall of the chapel as we might expect that greets us, but a line of seven Hathor faces from top to bottom. These are the Seven Hathors, the lady musicians who would come to the birth of any person to predict their fate in life. They are depicted in quite a few other places around the whole temple complex as well, playing their tambourines and sistrums to help the mother get through labor, singing hymns to Hathor and ready to tell which way the baby’s life would go. One wonders what they foretold at the birth of Caesarion…

Coming back out into the sunlight, you blink and have to readjust your eyes. This happens a lot here, as most sacred places in Egypt are often quite dark because they reflect the state before (and during) creation, when there was no sun yet but nothing other than the Nun, a vast ocean of something like our primordial soup… It is easy to understand that the appearance and daily rebirth of the sun was so holy in this country – it is literally drenched in it.

Making our way out slowly, admiring the super thick and strong fortified walls around the temple complex that still guard it today, we can stroll around the Roman sanatorium, admire the Bes we passed as we walked in, and nip into the mammisi, to witness yet another sacred birth.

What comes next on our Dahabiya Nile Cruise to Minya

Motherhood, beauty, stars, destinies, births, holy waters – it is clear to see why this House of Hathor was so sacred in ancient times… Our next destination, however, speaks of a very different life – the afterlife.

Enjoying the magic of our Dahabiya Nile cruise to Minya, we will sail to Abydos, where Osiris, the God of the Afterlife, held sway. Another amazingly beautiful site, but we will tell you more about that next time – we are in no rush. We simply want to share these unbelievable places to sightsee in Egypt with you.