Travel Story: From Luxor to Aswan By Motor Ship 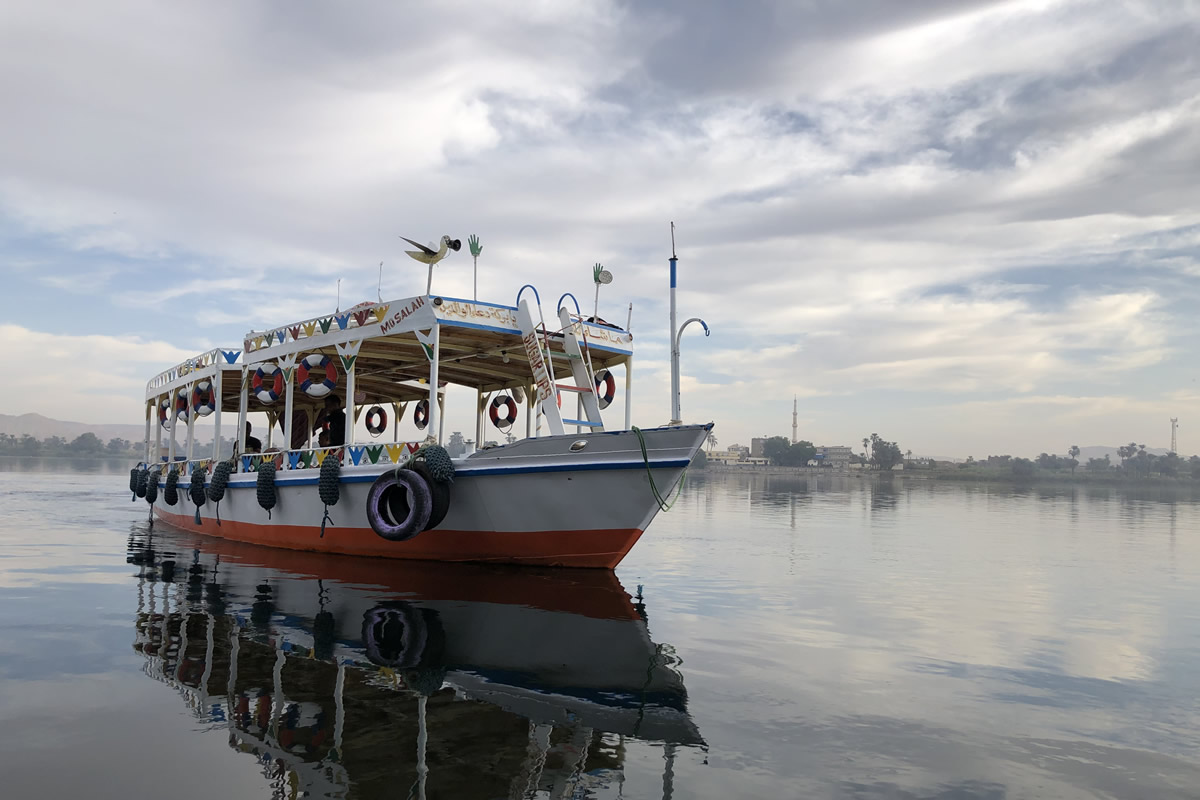 150 miles of mangos and date palms

In April 2013 I treated myself to a luxury trip on a dahabiya, the Orient. Sailing on this luxury ship was such a dream –I felt as if I was back in the daysof the British Empire. I planned to repeat the trip in August, but this time with a difference.

The journey was arranged, the flights were booked. Then the German Foreign Office sent out a travel warning, which also warned against Luxor as a destination. However, my friends in Luxor told me that everything was quiet. So we went on our way.

This trip on the motor ship was more basic, very laid-back. Because I enjoyed it so much, I’d like to tell you about it.

Along the way, we visited the temples ofEsna, Edfu, Kom Ombo, and Horemhep and the camel market in Daraw. However, I’ll limit my account to my personal travel experiences, because the sights themselves are better explained by Egyptologists.

We get up early and pack our bags –everything, because I don’t want to leave the bags behind in Luxor. I try to pack sensibly so that what I will need in the next four days is at the top of the bag or in the backpack –not my strong point. The driver picks us up and takes us to Esna where our cruise is due to start. The drive is beautiful; the road is lined with bougainvillea bushes in full bloom. We pass banana plantations and cornfields, donkey carts, buses and funny little vehicles like motorbikes with a cabin superstructure with seating for four passengers. These are the typical means of transport in the villages, decorated with hearts and flowers. Mohammed the skipper, Mahmud the ship’s boy and Yousef the cook are waiting for us in Esna. We stow the bags –thank God they fit underneath the bench. The motor ship has two parts: in the rear there is a 40-hp motor –that’s where the skipper sits. Then there’s the galley, equipped with a gas cooker with two burners. The spaces in the floor hatch and under the benches are crammed with lots of bottled water and water for tea. Every inch of space is used. “In front” is where we sit and read, listen to music, or sleep.

Now we sit on the ship and wait. Apparently, the cook hasn’t finished shopping yet. He dropped off a block of ice and disappeared again. Nothing moves, neither the boat nor the air, and we sweat.

Observations in the heat

The nail polish on my fingernails turns soft at temperatures of 40°+. Heat only becomes unbearable when you say that it’s unbearable.

Nights on the Nile

The first night. We anchor at an island and take a swim in the Nile. The current is quite strong, so I can’t really swimproperly. Upstream is too tiring, and if I swam downstream, I would end up too far from the boat and often there’s no way to walk back along the shore. I couldn’t do that in a bathing suit anyway.

After a delicious meal, a cup of tea and a round of cards, our beds are made up on the roof. I listen to the frog chorus and fall asleep quickly. In the following nights I don’t evenwant to sleep, for nights on the river are an experience I don’t want to miss. The sun sets around 6.30 pm, and the moon rises. I hear croaking, chirping, cawing, snorting, and every now and then a donkey.

In such mild temperatures, I don’t want to coverup, because the cool air is so pleasant. But then it turns humid, and around 4 am, when the night is at its darkest, it gets really cold and I start to wish I had a second blanket.

At home I never experience a sunrise, because I like to sleep in. But here on the roof, comfortable on my mattress, I can watch the sun come up. Nature comes alive. Tweeting, bleating, and mooing resound everywhere, and on deck I can hear the clatter of the breakfast dishes.

My Office in Kom Ombo

I want to confirm my hotel booking in Aswan. The confirmation is on my laptop, but the battery is empty. I need to plug it in. So we visit the head of the pumping station in the harbor. He finds a power socket somewhere between the pipes, and I’m in business. I sit ona stone ledge, he brings me a cushion and tea. Not bad!

After a chat with our host we carry on. We had actually intended to travel further upstream to anchor for the night. But when I notice that I’m getting a bladder infection, we immediately go toa pharmacy to buy some medicine. No problem if we anchor somewhere else. On the whole trip I never hear a single complaint, nobody ever seems to get annoyed. That is very pleasant.
In Kom Ombo Skipper accompanies us to a pharmacy. The sales assistant doesn’t speak English but phones a doctor who comes around immediately. It is really hard to believe how caring and sweet people are here. The doctor goes through the whole package insert with me. Now I have a dose of granules to dissolve, which helps, andknow that I need to drink more.
In Kom Ombo we visit the temple with the crocodile mummies. On the way back to the boat I want to buy beaded caps to take home, but I don’t want to pay more than 50 LE for one. Finally I pay 10 LE, and in the end a seller offers me two for 10 LE. I wonder how much the people who make them are paid. Tonight we sleep on the roof again, after a night swim and a tasty meal.

We are alongside Abercrombie and Kent’s dahabiya. Our skipper is invited aboard by the captain. We aren’t. But once again, the skipper gets me a power supply in the shape of a very long extension cord.

Although we stayed in a lovely hotel in Aswan , we actually wished we were back on the motor ship. The food was better thereand I enjoyed swimming in the Nile more than in the lukewarm pool. But I have nothing against a lovely bathroom and a proper shower.
On the last evening we t the skipper out to dinner in the Old Cataract Hotel. Again I feel as if I’m back in the era ofthe British Empire –dark wood, brass, liveried waiters. The food is excellent.
This will certainly not be our last trip to Egypt. I hope that Egyptians will soon find peace and stability.
Go to Top
Cookie-Zustimmung verwalten
We use cookies to optimize our website and our services
Manage options Manage services Manage vendors Read more about these purposes
Show settings
{title} {title} {title}